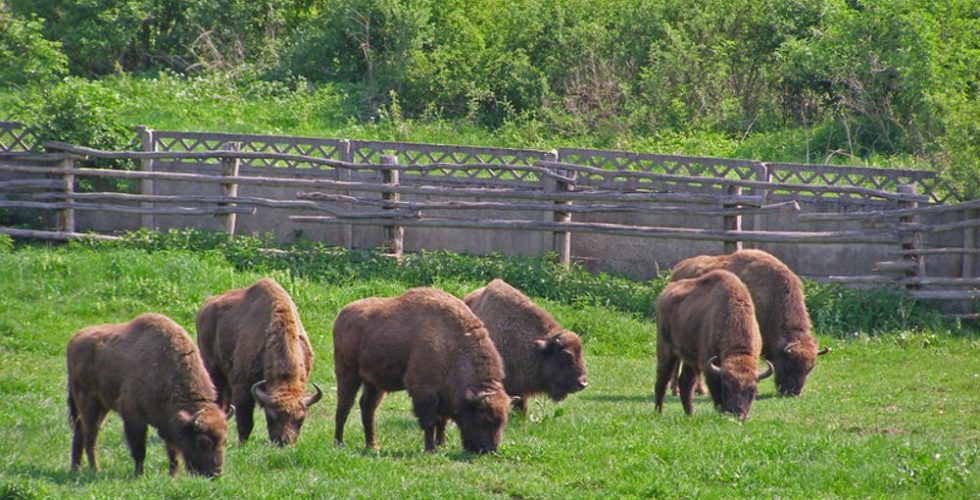 Hațeg-Slivuț Bison Reserve range on an area of ​​50 hectares, covered with carpenter, oak and fir woods. Located 3 km away from the town, the reserve of Slivuț Forest boasts being the first place on the territory of Romania, where the European Zimber has made its appearance. This happened in the autumn of 1958 when a pair of zimbri - Podarec and Polonka - was brought from Poland. More than five years ago, one more copy was brought from Poland, Pumila. They multiplied, so that in 1979, in the Zimbri Reserve Slivuț - Haţeg, there were a total of 12 bison. Those born in Romania have been given names starting with the letter R. In time, some of the bison born in Haţeg (a total of 47 chickens) took the road to other places in Romania, where they later formed the Reserves of Zimbri, namely Vânători Neamţ and Neagra Busşani. At Vânători - Neamţ Reserve were taken from Hateg three copies in 1969, in Neagra Bucşani six specimens left in 1982. Three other bats from Haţeg took the road from Bucharest in 1966 to be given to the Zoological Garden, a year later two more pups left for Pitesti. In 2002, three specimens of bison from Bucşani were brought to Haţeg. The Slivuț - Haţeg family of bumblebees received the last copy in Roxana in 2004. Thus, there are currently four bison in the reserve: Romo, Roxi, Romina and Roxana. Within the reserve of Slivut - Hateg, other representatives of Carpathian fauna, carpathian deer, beaters, black goats, bear, boar, deer, pheasants could be met. Over time, they were taken to various zoos in the county or in the country or released, on the grounds that the bison reservation is not authorized as a zoo, and no animals other than bison can be kept here.